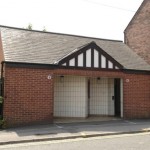 POLICE are pledging action amid fears that Wigan toilets are being used as a sex den.

Shocked shoppers have reported seeing two men having full sex next to the urinals at the public conveniences in Ashton.

And now a ward councillor is demanding action after insisting the Princess Road facilities she campaigned to have refurbished by the local authority are becoming a “no-go” zone for disgusted shoppers.

Labour’s Ann Rampling – whose own adult son has complained about being propositioned there by a middle-aged man – is worried the toilets may have been advertised as a meeting point on a sex contact website.

She met police chiefs this week to discuss the complaints, and has welcomed GMP pinning up warning notices on the walls of the toilets warning that they are now monitoring the conveniences for illegal sexual behaviour.

Recently, a shopper about to use the toilets was forced to leave when he found two men indulging in “full penetrative sex” in full view in late afternoon.

Grandmother Coun Rampling wants to stamp out such brazen and lewd acts before the school holidays.

She is concerned about the apparent escalation of cottaging, and the outrage it is causing among the wider population.

She said: “This is a situation that is growing, and is all the more shocking as it is during the day. The toilets are locked up in the early evening after being cleaned.

“My own son has been accosted there, and to be frank, he was so angry that he lamped the man and ran out.

“Since people have found out I was meeting police, I have had a number of people coming up and telling me what they have seen, and how much it upset them.

“Anybody who knows me knows I am absolutely not a prude and I don’t mind what people do. But if there is a time there is certainly a place – and this isn’t the place.

“I have got gay friends and this isn’t the issue. The concern is they are doing it in a public toilet in full view, and not even in a cubicle.

“When I spoke to the police, they confirmed they have known about this happening a couple of times before, but they thought it had eased off.

“The concern now is that it seems to have started again.

“My worry is that I go down to Ashton with my grandson, who is nine, and he doesn’t want to go into the ladies’ toilets with his grandma – he wants to go into the gents’ by himself. But I don’t want to think about him witnessing something like this.

“I campaigned outside the toilets to get them cleaned up after I walked in one day and found a young girl changing a baby on the dirty floor, which left me absolutely mortified.

“I got a changing area in there, and the whole toilets were cleaned up.

“The last thing we want is for them to now become a  no-go zone for people.”

The two men involved in the latest incident were said to be in their mid-40s.

Police confirmed they are currently investigating the complaints.